During my attempts to create these various satellite backgrounds,
I've had to do some research and also learned a lot of new stuff.
I thought I'd share some of that here and also talk about why I'm
NOT going to, even try to, adjust the background to all sorts of
maps.

First of all it took me some time before I realized, that the BG
maps are generated in a certain map projection. More or less by
luck, I stumbled on to some map projection definitions in a game
file I definitely NOT would have thought I'd find it in. For the
SCS's maps it's in /def/climate.sii. There you'll find the info
and parameters regarding that projection and also a formula on
how to compute the position on the earth surface using some of
those parameters.

If I'm not mistaken, SCS changed something regarding this somewhere
around version 1.26 or so and e.g. Promods team says that they have
still not totally converted over to the "new projection". Cyprus and
north of Scandinavia e.g. Further, a lot of present day maps was once
created long before this change, so there's a big chance that many of
them share the state of Promods. Now I'm going to categorize the maps
we are using and comment a bit on each of them.

1. Primary maps, the maps we're building our combos from as a base.
a) SCS Vanilla
b) Promods
c) TSM (not on 1.35 yet)
d) MHAPro
When it comes to these and their relation to a satellite background,
I think it's mandatory to try and register them as good as possible.

2. Addon maps, the maps we then add to the primary maps in our combos.
In this category I only count those, that are attempts to add real
countries, in their real locations AND with the standard scale, 1:19.
These ones should get some extra attention, when it comes to making
them end up in correct locations, even if they were not created with
this "new projection" as help in Map Editor. Probably not every one
of them will be registered succesfully.

3. Non-standard scale addon maps, at least located in the geographically
correct place. I will NEVER try to warp the BG image severely enough
to be able to have them over the proper background. They will have to
be located where they are. Horrible, but the alternative is even worse.
So, don't ask me to fit SRMap better, that is up to it's creator(s) to
do by re-scaling and moving it to it's proper place. There is ONE valid
exception here though and that is the UK and in Iceland in Promods case.
They need special attention as they are parts of a base map. I had an
extra problem there because Promods don't even have the scale of the UK
in SCS standard scale, 1:15, but 1:14 which gave me some extra headache.

4. Re-located and fictitious map addons, like EAA, Tasmania, PJ Indo, China,
Antarctica and others. Nope, no attention there from me.

5. Standalone maps. I won't touch those, as far as I see it now, even if I
helped dOOmERdaZe to register his BG mod for EAA standalone a bit.

Well, after having learned that the BG images ought to be in a special map
projection, specified by SCS themselves, I started google'ing to learn a bit
about that. As I've worked pretty much with map related things in my regular
work, it wasn't totally unfamiliar to me. After a while I first found a neat
little program I could use to do a lot of map translations with, 180+ they
say! Then, when I saw what type of input map data the program could use, I
started the search for a good starting point data. I ended up with a huge
HiRes bitmap, 21600x10800, in a map projection called Equirectangular. So,
then I went off starting to make my first attempt to create a BG image that
was suitable for the ETS2 game. Those of you, who have followed this topic,
knows what has happened after that.

So, to summarize it all. It's NOT an easy task to create this kind of BG image.
A rough guess gives around 300-400 restarts of the game, just in order to get
the map data registered approximately correct over the background. As it looks
right now, there will be 2 different BG mods + 3 new Zoom mods, modified Arayas
SuperZoom ones, when released. If and when TSM is released for 1.35, I might look
into the task of doing something for that too. I must admit that I haven't tested
if MHAPro for 1.35 can be used already with the standard mod, but I'll let you
all know, when I've done that. I've already started the testing of a similar mod
for ATS, some selected people are testing right now! It is not decided yet, but
probably it will be dOOmERdaZe, that will do the release of these mods. Keep an
eye on this topic, if you are interested in getting a larger area covering HiRes
satellite background for your constellations.

P.S. All mappers reading this, here's a question for you! What do you use as a
background image in the Map Editor when creating your maps and how the hell are
you registering them to be correctly located? If possible I realize that you use
at least one sector from another map that you ultimately will connect to, but
here I'm talking about your own background! Arayas has it easy I can imagine, as
he probably just use the standard SCS Map Editor background, but who knows, even
he might have to create his own BG. :D Comments please! D.S.

EDIT: I have now also tested MHAPro for 1.35 and it will work flawlessly with
the same mods as SCS Vanilla, when it comes to BG image.

EDIT2: This is the SCS included Map Editor background image area, and from
that we can see that Arayas whole area is covered, all the way to east, even
a bit of SRMap there at the end. So, maybe I won't get many answers from
mappers inside this area, but ExtremorPL, PerrydPelle, FunTrucker_10 and
09_KZ, how do you handle your background in ME? 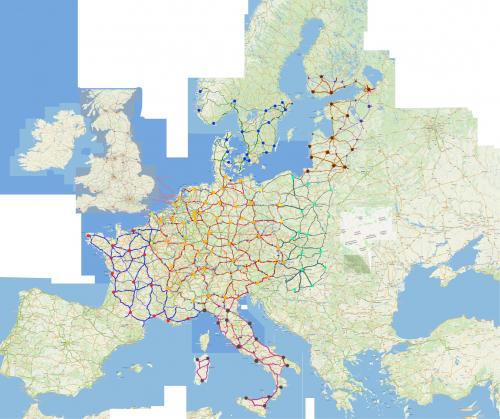 But it looks like I now have to do it from stratch. :?
Road to Asia map developer. Our map is going to be released in 2020 so stay tuned. :D
Top

Maybe I understood your question wrongly but my map needs moving and a new background and it shouldn't be a huge problem. The only thing I worry about is I don't know exactly how to create a new one haha

Road to Asia map developer. Our map is going to be released in 2020 so stay tuned. :D
Top

Here's a little sneak-peak on the ATS version of the satellite BG.

That's for you to add and get surprised about!

Yes, you showed me earlier with my BG that your data was a bit shifted.
What have you used as BG image when creating that data? You can, as it
is a relatively small area, take some region directly from Google Maps or
some similar service, but then you might have to rotate it a bit, as Google
Maps e.eg., uses a Spheric Mercator map projection, that is different from
what SCS uses. Then it is only a question of positioning it properly before
starting mapping. In the positioning phase you can have some use for my
BG, as that one is in the correct SCS map projection. Just concentrate on
the task to get YOUR own BG in ME correctly positioned and from that you
then create a road connection to other maps, in your case YKSRSK, I assume!

I used Maperitive and OpenStreetMap. I'm not good in making background things. So I'm asking you, maybe you have some ideas how to create that background? I want to cover with that background Turkmenistan, Uzbekistan, Iran, Afghanistan, Tajikistan, Kyrgyzstan and a part of China and India. :D ;)
Road to Asia map developer. Our map is going to be released in 2020 so stay tuned. :D
Top
Post Reply
1201 posts

Return to “Other mods”