The bad thing is that I am occupied over my head right now with other ME BGs and
also my World Map view BGs, plus a lot of support. I rarely can run the game to drive
as before and I should also do some mapping myself. Sigh! I will see later when things
have stabilized a bit! But thanks for the heads up, I think b738pilot should consider
this too.

EDIT: I see that Duckie has abandoned Project East and concentrate on the Islands map.
He also have a topic on the SCS forum here.
https://forum.scssoft.com/viewtopic.php ... 5#p1414795

by olaf28
@Rafaelkai
We know that Duckie is also thinking about Cuba, but he is now busy with Hawaii after after abandoning Project East.
Let's see what the project Hawaii brings before we start coordinating two projects for Cuba that have yet to start.
Moreover, the intention is that we will not only do Cuba, but also the rest of the Caribbean islands.
By the way, if Duckie does not want to take the BG map into account at all, then there will be little cooperation.
Anyway, we always want to consider it of course.

EDIT: I see that Duckie has abandoned Project East and concentrate on the Islands map.
He also have a topic on the SCS forum here.
https://forum.scssoft.com/viewtopic.php ... 5#p1414795

It is still not very clear to me why he abandoned Project East when version 5.0 was almost ready. This has not really done its reputation well.

He says it was his first mapping project and have now learned, but I also got wondering.
There's too many people that all of a sudden just abandon a project!

by olaf28
@Begnan,
Yes that's what I read also, but the new parts for version 5.0 looked very promising. There where video's and he was near beta testing. And then he droped the whole project.
Of course I can understand that making een fresh start helps. But I am now careful to immediately look for cooperation with Duckie. First see what Hawaii delivers.
But that's my 2 cents

Then you must have stolen my two ones!

by olaf28
Oh but then my assets have doubled this month

Then be careful with all those resources!

I am fully aware of another mapper trying to claim Cuba on ATS. In fact, this is what caused me to rush an early announcement of my side project. I started working casually on Bahamas back in the Spring time to test out some defs to utilize in my Red Sea Map project (as ATS runs a lot quicker for some reason on my PC than ETS2). I had Bahamas created for a long time, and since the flags were similar to Sudan which I'm building in Red Sea, I was able to really experiment with new tasks I was learning at that time so now it got to the point where after enjoying a drive in the aqua blue water on the map with a Bahamasair trailer, I had to share this with the world. I also developed a personal plane to balance both map projects, NONE of them will be abandoned I can guarantee that.

On a second major point, my map projects are a TEAM effort, I do not map alone. I am convinced that in order to create a great project, you need a strong team of detailed beta testers who will test it in depth before a public release, a research department made of those who specialize in that geographic area who can assist with making it look realistic and help create the illusion of the driver that they are really there, and then a support team (Olaf in my map projects' case) who can assist the community and coordinate accordingly. Also, I have a second developer and may even bring on a third.

Finally, I don't see any indication of the other Cuba project utilizing C2C, so I'm not sure how he plans to connect to the rest of the United States. I already have modified the closed road on C2C's Fort Lauderdale port area, which like IRL there is a ferry port east of the airport (that even has ferries to the islands as well!).

Regardless of what the future holds with our maps, I am definitely making Guantanamo Bay as I have real life experience visiting that area. The rest of Cuba, I foresee two options:

1. We coordinate and can meet halfway somewhere
2. We make our own separate projects and the community can choose which one they want to download. (Just like how you can choose EURoadNet or ProMods, and soon Canadream or ProMods Canada, etc.)

Thanks for the info and nicely spoken! I can tell you that I'm now finished
registering the Sri Lanka Map Editor BG and it looks like this in game when
correctly positioned. I use three significant points to register and in the
following image you can see the in-game road numbers at those points.

And here it shows how Colombo city looks like in the Editor. 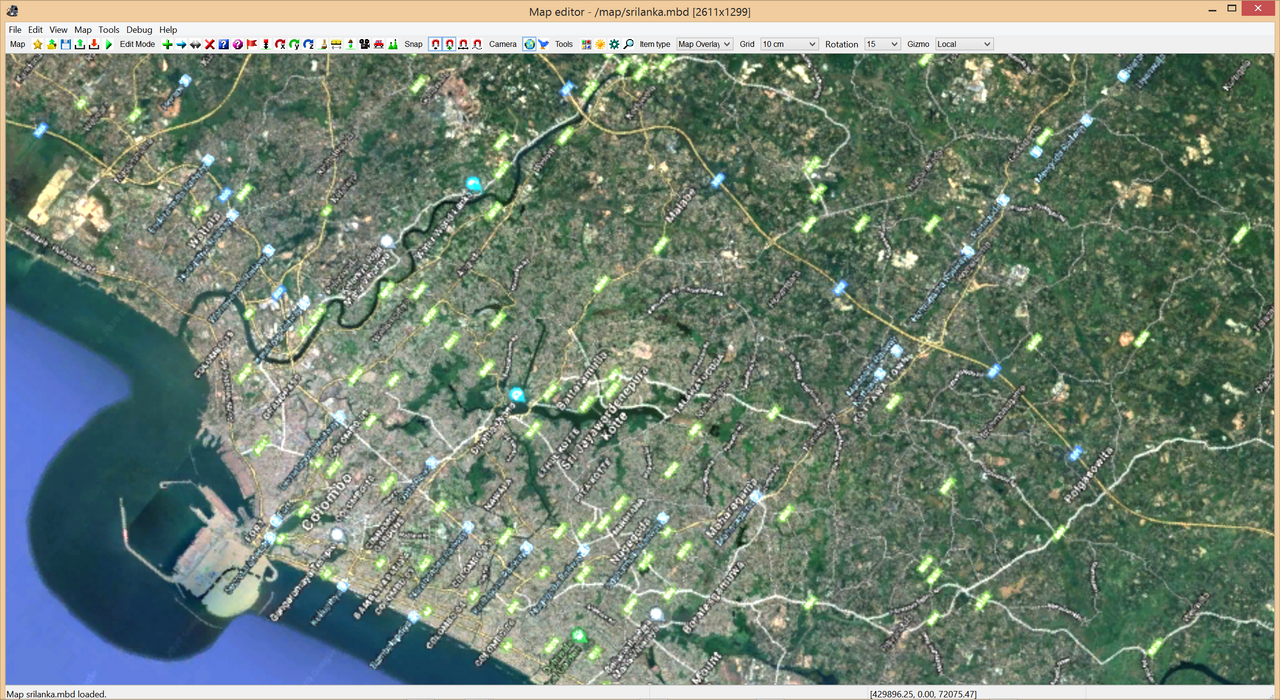 Question! In your upcoming ME BG, are you really going to map anything
on those eastern islands like Guadeloupé, Dominica, Martinique, Barbados
and Grenada e.g.? They don't seem to be big enough for a scale of 1:19?
Can I exclude them?

by b738pilot
Nice, as I stated earlier, your work is very impressive and helpful to the community!

If I do those islands in the east, it won't be for a while. Plenty to be done in the West Indies like Bahamas, Cuba, Haiti, Jamaica, etc. But I plan on the Caymans even though it'll be like one or two roads with one job site, probably at the airport.
All times are UTC+02:00
Page 2 of 8
Powered by phpBB® Forum Software © phpBB Limited
https://www.phpbb.com/