honestly I do not know exactly what I did ... but it works now :)
Thank you
Top

Hello ,
there is a new poland addon map released : http://www.modhub.us/euro-truck-simulat ... -mod-1-35/
my question is where do I place it.
this is my loadorder : 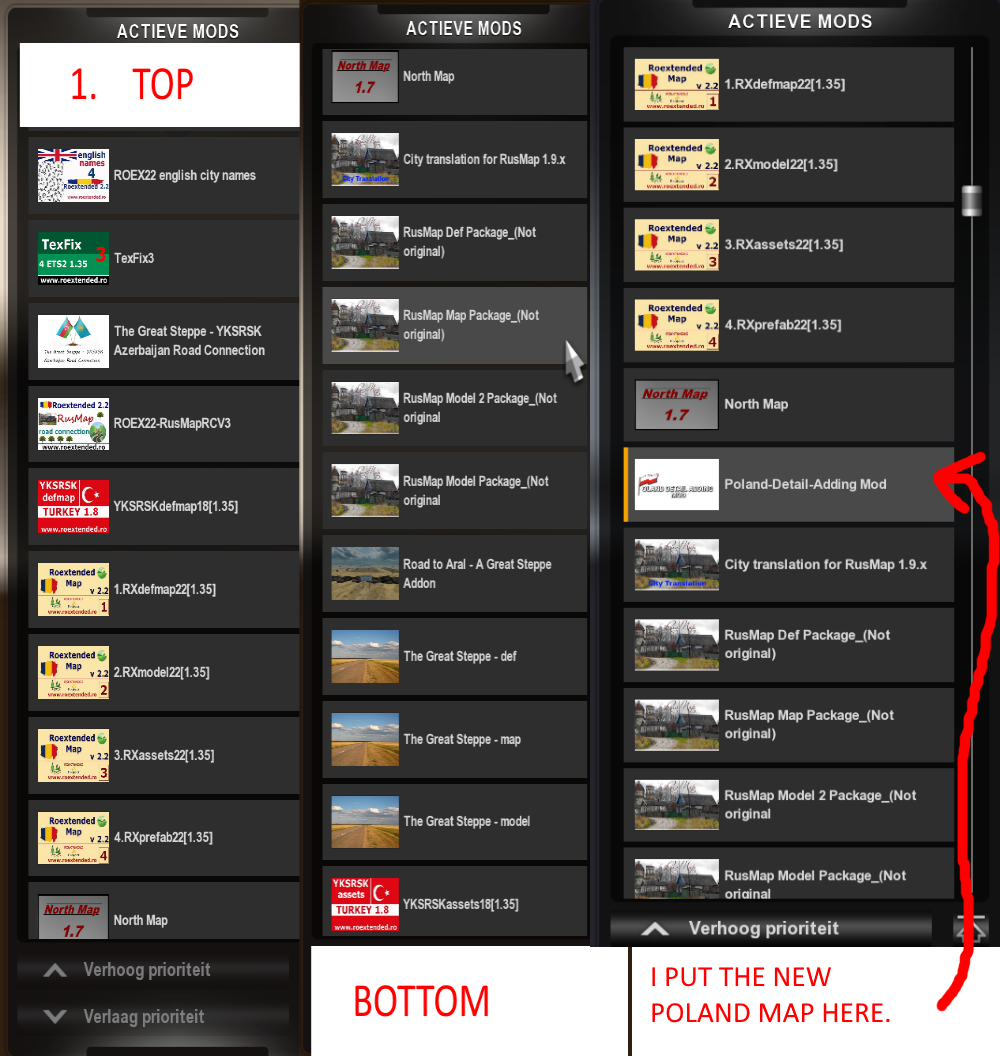 and the red Arrow is where I place the mod in loadorder ,
when I start the game I have no seen errors.
I haven`t driven it now.
I go to test it today but if anyone knows that another loading place is better please say so.
Top

Are you sure this map connects properly with RusMap and Roex?

I`m not sure but for what I have seen yes.
the new city`s arein the middle of Poland.

I go test it now from Amsterdam to a new city of it.
Top

If that is the only area where they added detail, no problem. The placement in this case is realy not important.

I have to ask! Why the hell are you DL'ing that from ModHub site?
They have a topic on the SCS forum, still marked as WIP, but last
post says that 10th of Aug. is official release date. Topic show no
release yet though. Have you maybe DL'ed a leaked one? Topic:

EDIT: Some research took me to their offical own site, where you can read
that what is out today, is an open beta version, and it should be DL'ed from
their site, as that is the original place. Link to their site:

Let me tell you about https://ets2.lt/en, one of the most popular download sites.

They took down my map one day after release. I was not aware about the motif and the exchange of emails between them and me stoped by them not answering anymore when i asked about the reason.
For previous version (2.1) i was receiveing in my email some reports about my map beeing republished by other persons in several places (not ets2.lt).
I tooked actions to take them down and in the process i also discovered some of those sites were sister sites with ets2.lt.

Sending notifications to the site itself or the owner had no impact whatsoever (i was expected that, the thief isn't gonna be a thief anymore if you just tell him to stop).
I notified uploading sites about this (like sharemods for example) but also we notified the hosts of those sites who are partialy responsable if they don't take actions agains their clients if the content is reported, because they have their own therms and rules, like my host has also.
Of course all thing was closed and the references about my map were removed, BUT they didnt like this most likely because they had problems with their hosts and uploading sites.
So, i've figured out how this works:
You bassicaly deliver your mod to be stolen by uploading it to ets2.lt.
They keep a legit face on their site but in the next hour your mod is downloaded and reuploaded in sister sites.
They don't need to look for it, to search it, you just hand it to them.
I talked about this with some Youtube streamers who normaly are using ets2.lt as source for the mods they use and they changed the links to original ones, the true place where the mod is published, like this forum, SCS forum, Promods site and so on.

Yes, and I will only add a few things.